Adil Karimlux is just about to head off and take his Kenyan cooking on a global journey. Globalizing Kenyan cooking is a challenge he took up years ago, as his many cookbooks reveal. But now he'll be traveling to new territories where he'll be tasked to share his unique style of Kenyan cuisine.

If Adil Karimlux weren’t so camera-shy, the Nakuru-born culinary connoisseur most likely would be known today as Kenya’s equivalent of a Jamie Oliver. He’d be a celebrity chef and renowned restaurateur whose cookbooks, filled with tasty Kenyan-Indian recipes would by now have gone global on social media. 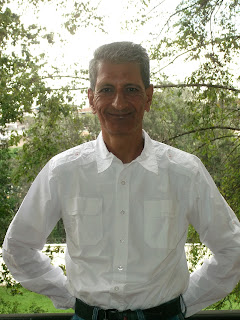 Adil Karimlux on his balcony at his Muthaiga Garden Flat in May 2012. Pix: Margaretta

The author of no less than four cookbooks, including A Taste of Kenyan Cooking and Food to Die For, came closest to ‘stardom’ when he worked with Susan Kamau whose Kenyan Kitchen magazine started doing food demonstrations in fabulous kitchen showrooms. If YouTube had been around back then, Adil might have become a foodie spokesman for the way Kenyan-Indian cuisine can promote healthy eating and living.
But Adil has never sought the limelight, although he has always loved cooking and hanging out in kitchens. Initially, he’d watch and learn traditional Indian culinary tips from his grandmother, great aunt and beloved mum Aziza.
Then it was his cherished Aunt Saida who introduced him to ‘exotic foods’ like artichokes and asparagus, crab, lobster and prawn, fish thermidor and even fruit flan.
But the kitchen that made him the best known maître d’ in Nairobi for more than a decade was the one at the French Cultural Centre, now known as Alliance Francaise. That is where Adil partnered with the French chef Christian Caldara to run Le Jardin de Paris Restaurant from 1977 up until 1991.
Adil had just returned from doing a degree in Business Administration in the US when he signed up for a French language course at FCC. Christian had just got into a motorcycle accident and Adil saw he needed help both in the kitchen and in managing generally.
“The restaurant was brand new, so when Christian went for check-ups or surgery, the place would shut down. That’s how I began to step in,” Adil said.
Hired first to be Christian’s accountant, he quickly advanced to maître d’ and chief soup and sauce connoisseur, responsible for ensuring tastes were fresh and flavorful.
“But neither Christian nor I was prepared for the overwhelming success of the restaurant,’ he said. Le Jardin de Paris would host everyone from local politicians to international film stars to embassy officials and ordinary Kenyans, many of whom utilized the facilities newly established by the first FCC director Pierre Comte. 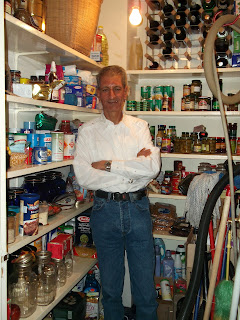 Adil is his mini-cupboard and winery at his Muthaiga Garden flat where he does lots of Kenyan cooking for family and friends. Pix by Margaretta

The Kenyans who came were usually actors and visual artists, dancers and musicians, language students and media people, much like the crowd that Alliance Francaise attracts today.
“We were quite young,” said Adil who was just 20 when he first stepped foot in FCC. “We were preparing food order by order, so a lot of my work involved keeping people calm.”
At its peak, the restaurant had 25 tables while the kitchen had a dozen chefs plus many ‘veggie mamas’ hired to clean the salads and couscous.
One of the main reasons for Le Jardin’s success was the freshness of the food and the fact that most of the cheeses, wines, pates and even chocolates were flown in from France. So were special seeds that would be planted and grown in Limuru and Karen.
“Mrs Chege of Echuka Farms grew everything from exotic lettuces and snow peas to wild strawberries for us. She’d also bring us her yogurts and heavy creams,” Adil recalled.
But in addition to the quality of the cuisine, it was the restaurateurs, Adil and Christian who established the warm welcoming ambience at Le Jardin. And when they shifted over to Alan Bobbe’s Bistro in the 1990s, they brought the same warm welcoming style with them.
In Christian’s case, his whole family had been in the culinary business for many years. Not so for Adil whose fascination with food had been frowned upon from the time he fried his first potatoes at age five and baked his first cakes at age six. Attracted to the kitchen initially because he had no one to play with as a child, and all the vibrant activity in his home was situated there, with the women, Adil had been forbidden to frequent the kitchen.
But he did it anyway, even though it meant his dad would discipline him with a cane.
Sent to the best schools in Nakuru, Nairobi, Eldoret and the States with a view to his coming home to run the family businesses (many of which were started by his great grandfather Ibrahim who arrived in Nakuru from Punjab in the 1890s), Adil’s refusal caused a family rift that led to years of relative penury on his part.
But Adil had his culinary craft and myriad friends to fall back on. His years frequenting the family kitchen enabled him to not only run restaurants and write cosmopolitan cookbooks (since 1998) that combine Kenyan, Indian, American and even Scandinavian culinary styles. He’s also become an advocate for healthy eating and even changing lifestyles to improve Kenyan families’ quality of life.
So today, Adil may not be Kenya’s Jamie Oliver, but he has become a kind of cultural ambassador for Kenyan cooking. He just got back from India where he was able to compare his own culinary calling with the finest Indian chefs. And soon, he’ll be on tour in Southern Africa sharing his cookbooks and exposing other culinary connoisseurs to the joy of Kenyan cooking.

Posted by margarettag at 6:12 AM