When Much's painting, The Scream, sold for $120 million at the Sotheby's Art Auction, I realized Pascal Chuma's life had also been transformed when his painting was the highest seller at the Village Market art auction held late last year in aid of drought victims living in northern Kenya. Perhaps we need more art auctions to 'grow' the Kenyan art market!

Pascal Chuma made the radical choice not to follow the majority of his classmates when they completed their art course at Buru Buru Institute of Fine Art (BIFA) in 2000.

“They didn’t believe they could survive as artists in Kenya at this point in time, so they became graphic artists,” said the founder of Bobea Art Centre in Donholm Estate. 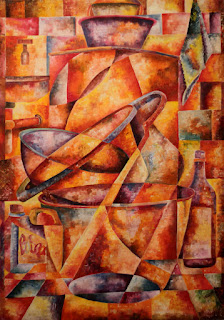 Pascal Chuma's In My Dairy. Pix by Marta O.

Conceding that financially speaking, it hasn’t been easy sticking with painting.

But once he won an award late last year during the ‘Kenya for Kenyans’ campaign organized by the Village Market to raise funds for hunger-stricken Kenyans who were victims of the drought in the Northeast, the prospects for doing well as a visual artist in Kenya improved significantly.

“My painting was the highest seller at the art auction run by Village Market’s Managing Director Hamed Ehsani to raise funds for the drought victims. It went for KSh260,000,” said Chuma.

The artist doesn’t know who bought the painting entitled  “My Dream will never die” since Village Market ran a ‘silent auction’ where anyone interested in an artwork wrote down a figure and then, people waited to see whose bid was highest.

“After that I also got a booking for Bobea artists at Osteria restaurant in Karen in April, although that had to be postponed until this coming June,” said Chuma who was speaking to Business Daily at the Village Market where he and his art students are currently exhibiting through May 7th in the Exhibition Hall. 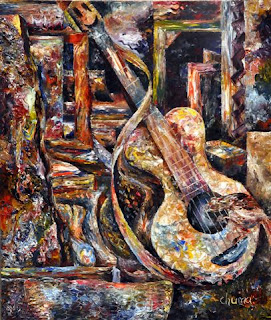 There were initially five artists who started the Bobea Art Centre, three of whom were graduates of BIFA: David Thuku, Sophie Wasonga and Chuma; but both Thuku and Wasonga dropped out of the centre once they got jobs. So did self-taught founder member Walter Lubisia.

It’s only Isabellah Nyanchoka, one of Chuma’s former art students, who remains with Bobea. But others have joined the centre, including four of the five other artists exhibiting with Chuma at Village Market right now.

They are Isabellah, Mundia Asena, Alfred Mwaengo and Sarah Kaloki. The fifth is sculptor Kepha Mosoti who is based at Kuona Trust.

In fact, Bobea has grown since they made the shift from Kayole to Donholm in late 2007.
“We had to move since most of the young talents we were nurturing and teaching disappeared due to their craving for quick cash,” said Chuma.

“The group formerly known as Mungiki got the youth to join their garbage collection business, which was a good idea [i.e. slum clean-up] except that Kayole residents were compelled to pay for the service. Otherwise, the youth would dump garbage in front of the doors where people didn’t pay.”

Shifting first to his home in Donholm, Chuma and company found his place too small. “So we rented a place near mine, where we both teach and hold exhibitions for our students.”

Chuma has had lots of experience nurturing youthful talent among Kenyans. His first job was straight out of BIFA where his cards, miniature printed reproductions of his paintings, found their way to UK where a group called Wetfoot International took interest in his wor.

“They contacted me and requested that I work as a ‘volunteer’ for them in Mwea among ‘disadvantaged youth’ which I did for several years,” said Chuma who recalled the way all his expenses were paid by Wetfoot, including art supplies, accommodation, food and even transport  between Nairobi and Mwea.

He also did similar work, empowering talented youth through teaching them skills in painting in Pumwani.

“I volunteered at St. John’s Community Centre, and was given an allowance for my work.”
It was after both of those contracts ended that Chuma decided to set up Bobea (meaning ‘excell’ in Kiswahili) Art Centre in 2007.

Now the challenge has been covering overhead costs, such as rent and art supplies.
“Our main source of revenue is currently the sale of my artwork and that of our students,” said Chuma who’s been dipping into his savings ever since Bobea was born.

He established quite a successful network of clients who appreciate his art, both among locals and global patrons, including the Canadian NGO “Painting a New World” (PNW).

“But our biggest challenge is having enough art materials to teach the youth to paint,” said Chuma who sees his busy exhibition schedule as a crucial way of generating and expanding greater interest in an art market that is both youthful and Kenyan.

“There is no doubt the talent and creativity is right here in Eastland. Our job at Bobea is simply to tap it. That’s what the Centre is all about.”

Posted by margarettag at 2:36 AM