A fabulous film festival with many amazing and powerful films.


The 21st annual European Film Festival opened last Thursday night at Alliance Francaise and will run through May 27 with shows at 5:30pm and 7:30pm every week night with an extra Saturday showing at 3pm as well. Cost of entry is KSh50 a show. 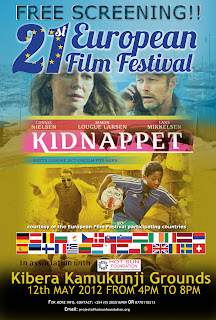 An added attraction this year is the free screening of the Danish film ‘Kidnappet (Lost in Africa)’ in Kibera, Korogocho and Mathare. The film itself was partially shot in Kibera. It’s about a young Kenyan boy who gets adopted by a Dane who takes him back to his homeland where he proceeds to get lost, mugged and hunted all over Kibera. It will be shown all three Saturdays during the festival.


Many outstanding films will screened this year, focused on a wide range of topics. Everything from multi-racial (Black Brown and White, 2011) and multi-generational (Sonny Boy, 2010) love affairs, to historical fiction (La Princess de Montpensier, 2010) and documentary film, (Nicky’s Family, 2010) to quirky comedy (Operation Casablanca, 2010) and a modernized version of the Biblical tale of Cain and Abel (Courage, 2010), all are part of this year’s fascinating film fete.


The awards won by eight of the 17 films are too many to list, but one received an Academy Award for Best Foreign Language Film of 2011. That was the Danish film, In a Better World, directed by Susanne Bier who also earned a Best Director prize at the 2011 European Film Awards.


The German film, When We Leave (2010) also earned a slew of prizes in 2010. They included the LUX European Parliament Film prize and the German Film Critics’ awards for everything from Best Feature Film Debut to Best Script, Best Actress, Best Cinematography and Best Music.


Other award winners that will be screened at Alliance Francaise include Italy’s La Prima Cosa Bella (The First Beautiful Thing) which won David di Donatello awards; Montevideo: Taste of a Dream which won at the Moscow International Film Festival; Celda 211 which won several Goya Awards in 2010; and Nicky’s Family which won at multiple film festivals, in UK, US, and the Slovak Republic.


A Czech and Slovak version of Schindler’s List, Nicky’s Family is based on the true story of the Englishman Sir Nicholas Winton was arranged eight trains to carry 669 Jewish children out of Czechoslovakia to Britain just before the outbreak of World War 2.


World War 2 provides the backdrop for several other festival films as well, including Sonny Boy and Lidice (2011) from the Czech Republic.


Many of the films are about crossing borders, be they national (D’Un Mur L’Autre, from Belgium, 2008), class (Pure, from Sweden, 2009) or racial (Black Brown and White, from Austria) borders.


There were only four women film directors featured in this year’s Euro Film Fete. Nonetheless, nearly all of them made award winning films. The Dane Suzanne Bier won an Oscar for In a Better World; Dutch director Maria Peters won at film festivals in the US and Holland, and the Swede Lisa Langseth earned accolades at the European Film Awards for Pure.


Only the Finnish director Kari Vaananen hasn’t yet won for her film Backwood Philosopher based on the ‘hugely popular novel’, Havukka-ahon Ajattelija by Veikko Huavinen.


It’s a festival well worth attending if you’re a film buff since not even the local DVD pirates have had access to most of them!

Posted by margarettag at 4:42 PM