Unbelievable as it may sound, Mwaura Ndekere actually sold one painting in China for the equivalent of KSh22 million to a Chinese billionaire entrepreneur. It was for charity, the  building of schools in semi-arid Kenya, and the artist didnt get much from the sale financially, but what a boost for his reputation, especially in China where he is far more renowned than he is in Kenya!


Mwaura Ndekere may be best known in Kenya to his students at Kenyatta University where he teaches in the Fine Art department.


Ndekere hasn’t been one of those local artists who’s got a public face and a notable name in the Nairobi art world due to his exhibiting often in any one of the commercial galleries, restaurants, museums or art centres around the town. 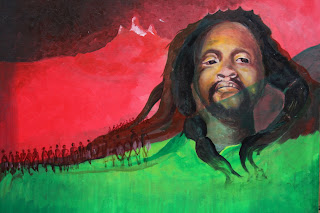 That isn’t to say that Ndekere doesn’t have art to exhibit and an artist’s studio full to overflowing with fabulous paintings. But it does suggest he’s got other priorities than putting his work out for public display, priorities such as teaching and also leading the Ministry of Culture’s National Art Commission for which he is chairman and has been for the last decade.


But Ndekere’s days of keeping a low profile are practically over since he got pegged for being a man who sold one painting for KSh22 million shillings! 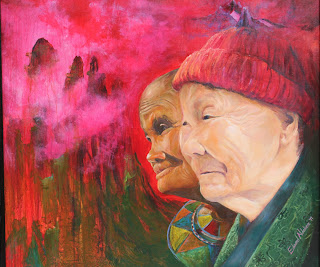 Ndekere painted this portrait of Chinese elders while on an art residency.


Granted the sale was made in China, not Kenya; the painting was auctioned off for charity, a Chinese-Kenyan partnership project involving Chinese building schools in semi-arid parts of Kenya; and the art patrons invited to the auction were 500 of the wealthiest entrepreneurs in China:


Still, nobody can dispute the fact that no other artist in Kenya has made anywhere near that kind of money for his art.


Kenyans have recently heard stories of local artists selling their artworks for KSh2 million; the news had stunned many who previously had only seen art as a poor man’s last resort when all other professions failed to materialize.


The Kenya Government had awarded Wanyu Brush the first commendation for his work in visual culture just a few months before Gallery Watatu’s Osei Kofi released the news that a painting by Brush had sold through gallery for KSh2 million. It was news that created quite a buzz in the local art world and roused parents to rethink their hackneyed perspectives on the irrelevance of studying art as a lucrative profession.


But then when NTV interviewed Adrian Nduma, a graduate of KU, about his recent sale of a painting for KSh2.1 million, the NTV phone line was said to be burning up that day. Apparently parents who had seen the TV show were calling to find out where their children could go to learn to be big-time earner artists like Nduma, Brush and now Ndekere.


In Ndekere’s case, it was the Ministry of Culture that connected him as chairman of the Kenya Arts Committee with the Chinese Ministry which was offering a two-month residency to a Kenyan artist. It was the Chinese who suggested Chairman Ndekere be the one to go. He agreed on condition that his KU colleague, Dr. Francis Kaguru, accompany him. The Chinese complied.


So in 2008, the two took leave from KU and went to study and create at the Shenzhen Fine Art Institute.


They weren’t the first Kenyan artists to study in China. Kisii stone sculptor Elkana Ong’esa had been there years earlier, his 12 foot tall sculpture “Our mother” stands strategically in granite at the heart of Shenzhen University.


But what differentiated Ndekere from the rest is the way he put all the art he produced while in China up online, using social media.


“We were also covered extensively by Chinese media,” the artist said. “It seems the Chinese hold artists in high regard and respect their work,” added Ndekere who sold most of the paintings he produced in Shenzhen to Chinese patrons.


“I also donated quite a few of my painting, both to the Chinese government and to the Shenzhen Institute.”


After returning to Kenya, the notoriety he’d acquired in China followed him all the way back to KU. Xu ‘Cindy’ Liang was a fine art major from the Luxun Art Academy in China, who found Ndekere’s art online even before she came to Kenya in 2008 and met him face to face.


Today, the two are business partners, in the process of organizing an exhibition of Kenyan contemporary art in Beijing. Featuring a large number of works by Kenyan artists hand-picked by Liang, most of the art has already gone to China since the exhibition is scheduled to open this month.


But even before Liang found Ndekere online, he was contacted by the China Youth Foundation.


“The organization builds schools all over Africa in ‘disadvantaged’ areas. In Kenya they build in semi-arid areas,” he said.


CYF had seen the way Ndekere had donated his art and hoped he would do the same for their fundraising for their Hope Schools Kenya.


CYF requested that the artist donates a minimum of twenty paintings to raise funds for the school. In return he would get a second trip to China.


“I was also asked to invite other Kenyan artists to donate their art, but none of them apart from Kaguru were interested.”


The key factor to Ndekere’s art selling for Ksh22 million was CYF’s decision to invited 500 of the wealthiest Chinese entrepreneurs to their auction. These are some the most avid art collectors in the world, according to a 2010 study of the Global Art Market by a gallery based in Maastricht. Holland.


It was they who got into a bidding ‘war’ over one of Ndekere’s works. The result was that the Hope Schools in Kenya will be all the richer for the value those Chinese entrepreneurs heaped onto his art.


The artist himself got a tiny fraction of the sale, but Ndekere is not complaining. “I was given a two-week all expenses paid tour of China in appreciation for my donation,” he said.


Now, because he is not the type to hoard his good fortune, Ndekere is helping Cindy Liang take art by Kenyans to China. Among them are Bertiers Mbatia, Joseph Cartoon, Kaafiri Kariuki and Tabitha wa Thuku, as well as younger artists like Boniface Maina and John Maingi.


The company Ndekere and Liang established together with Kaguru and Liang’s uncle, a Nairobi-based businessman named Tao is intent on promoting Kenyan art in China. Frankly, the timing couldn’t be more perfect as 2012 reports on the global art market note that Chinese art patrons are now the biggest buyers of art in the world.