“The Spirit of Africa” is a colorful and joyful exhibition at the Village Market from May 30th that Geraldine Robarts has been preparing for at least nine years. 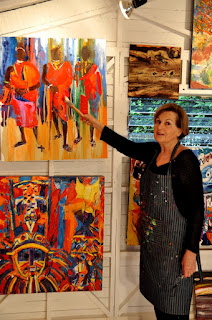 Geraldine Robarts in her studio will take her colourful paintinigs to Nairobi's Village Market from May 30. Pix by Michael Fairhead.


Actually, the show, which will be opened by the French Ambassador to Kenya, H.E, Etienne de Poncins and GoDown Arts Centre Director Joy Mboya, reflects a lifetime of work in the region since the artist was born down south to medical parents whose commitment to healing was just as strong as is the former Kenyatta University Art professor’s passion for painting.

Since childhood, Geraldine has always been painting and experimenting with various textures, techniques, colors and multi-media. For this seminal show, she’s worked mainly in oils using everything from palette knives and paint brushes of all shapes and sizes to her finger tips and even a surgeon’s syringe! 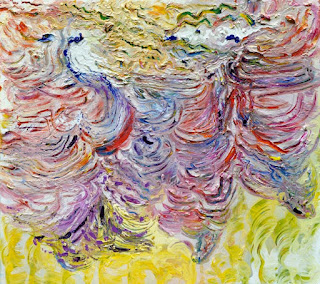 Geraldine's Dancing Figures were painted with her finger tips on canvas. Pix by Michael Fairhead


A committed Ba’hai whose spiritual commitment is apparent in her upcoming show, Geraldine first came to East Africa in 1964. She taught at Makerere University’s Margaret Trowel School of Art and Design for a decade before coming to Kenyatta where her art students included Elkana Ong’esa, Gakunju Kaigwa and Gikonyo Maina among many others.

“The Spirit of Africa’ is obviously informed by those years of experience, working in the region and researching African cultural history, both past and post-colonial.

Inspired by the African sun, her art is steeped in brilliant sunny colors, including splashes of incandescent reds, yellows and oranges. 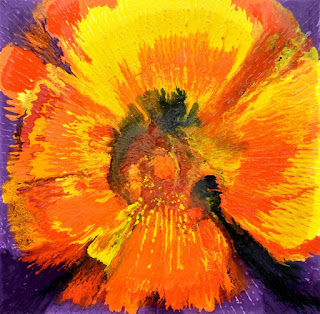 Geraldine has been inspired by the African sun, flora and fauna. She uses radiant, sun-kissed colours in her Spirit of Africa exhibition. Pix by Michael Fairhead.


Like many early 20th century artists who were inspired by African art, namely Matisse, Picasso and Braque among others, Geraldine has also been inspired by the African mask, employing its oval contours both as a symbol and metaphor.


For her, the mask is a symbol for celebrating the ancestors, for gaining access to their spiritual secrets and soliciting their soulful guidance and support.


But in her mind, the mask is also a metaphor for what people today wear and use in the form of clothes, languages and alien cultural rituals that Kenyans may learn is schools, churches, and other imported institutions, which are used to mask their real feelings and indigenous identities.


“Everyone wears a mask these days. Wherever you go, you see people performing social rituals that mask their real feelings and emotions,” said Geraldine whose masks all tell amazing stories. Like the masked askari whose ritualized work is to keep Nairobi’s commercial premises ‘secure’.


Besides masks, Geraldine has been influenced by the Daily Nation cartoonist Gado who uses creative images to craft political commentaries that speak volumes. For this show she’s painted several works that have a cartoonish feel but a political punch. One features two politicians in battle for the national cake; the other reflects on a lost generation of Kenyan youth, both expatriate and wabenzi African, who are so immerse in material indulgences they have lost any sense of direction or morality. Left at the mercy of their passions and material pleasures, Geraldine has seen that such youth sadly have little love, concern or compassion for their fellow human beings. 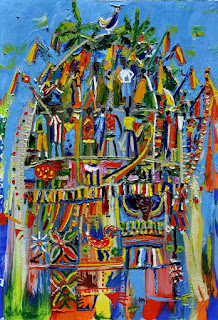 Geraldine sees hope for Africa's future in the spirit of its children. This painting celebrates African children. Pix by Michael Fairhead.


Some of her art is jarring, especially as her colors often are loud and clashing. But this too is in ‘the spirit of Africa’, says Geraldine who has spent hours painting outside local markets, both in Kibera and at the Coast.

“The markets are where you’ll see how Kenyans love bright colors, combined in various ways.”

One of her more monumental paintings is suffused with rich radiant colors that are layered and thick with bright oil paints. Geraldine says it’s meant to be A Celebration of African Youth. The stick figures of children in the painting may look like child’s play. But that is part of the beauty of her multifarious style.

She often paints like a chameleon who adapts her outfit and style to blend in with her surroundings. In this case, the idea she wants to convey is about children and their vast potential for transforming and reviving ‘the spirit of Africa’ with their innocence, purity and good will in contrast to their parents’ bickering and biases.

Unfortunately, Village Market’s Exhibition Hall is not large enough to house all of Geraldine’s prolific works, most of which are paintings in oil on canvas. Others are experimental, crafted with everything from beads and tissue paper to hard board and bamboo.

Seeing herself as a citizen of the world, Geraldine employs her art as part of a larger mission—to share the healing light that she’s found in her faith and in this show, to affirm the soulful ‘Spirit of Africa.’