The Scream by E.Munch sold at auction 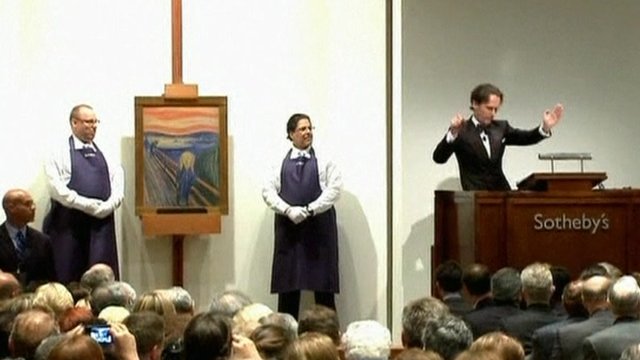 Cannot play media. You do not have the correct version of the flash player.
The Sotheby's auctioneer in New York told one phone bidder "I love you"
www.bbc.com may 3, 2012
What makes The Scream so iconic?
Munch’s Scream and the art of anguish

Norwegian expressionist Edvard Munch's The Scream has become the most expensive artwork sold at auction, after it fetched $119.9m (£74m).
The 1895 pastel was bought by an anonymous buyer at Sotheby's in New York. Bidding lasted 12 minutes.
The work is one of four in a series by the Norwegian expressionist artist and was the only one still owned privately.
Proceeds of the sale are to go towards founding a new museum, hotel and art centre in Norway.
Seven bidders were competing for the work, which had a starting price of $40m. The crowd broke into applause, following the sale on Wednesday.
The sale price includes the buyer's premium.
The previous record for an artwork sold at auction was for Picasso's Nude, Green Leaves, and Bust, which sold for $106.5m in 2010.
'Trembling with anxiety' The other three versions of The Scream are all owned by Norwegian museums, but Sotheby's say the version they sold is the most colourful. 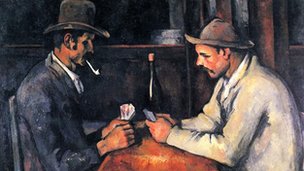 It is also the only one to include a poem by Munch on the frame, which talks of the inspiration behind the series of works.
It reads: "I was walking along a path with two friends - the sun was setting - suddenly the sky turned blood red - I paused, feeling exhausted, and leaned on the fence - there was blood and tongues of fire above the blue-black fjord and the city.
"My friends walked on, and I stood there trembling with anxiety - and I sensed an infinite scream passing through nature."
The piece was sold by businessman Petter Olsen, whose father was friendly with the Norwegian artist.
Earlier this year, Olsen spoke of his decision to sell The Scream.
"I have lived with this work all my life, and its power and energy have only increased with time," he said.
"Now, however, I feel the moment has come to offer the rest of the world a chance to own and appreciate this remarkable work."
The Scream has become one of the famous works of art in popular culture. 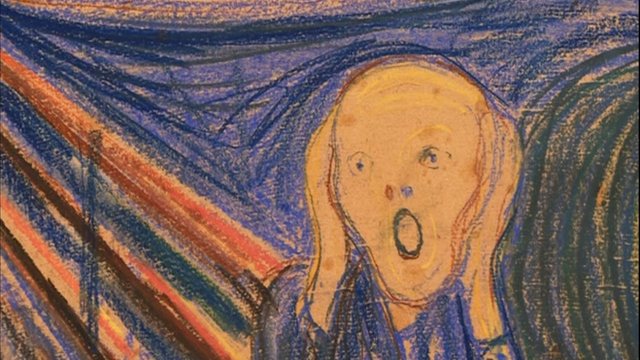 Cannot play media. You do not have the correct version of the flash player. Download the correct version
Philip Hook from Sotheby's discusses Edvard Munch's masterpiece with the BBC's David Sillito
"Together with the Mona Lisa, it's the most famous and recognised image in art history," Michael Frahm, an art adviser with Frahm Ltd, told the Associated Press news agency.
He added that it has been "used by everyone from Warhol to Hollywood to cartoons to teacups and T-shirts".
Two of the other versions of The Scream were stolen, in 1994 and 2004 respectively. Both were later recovered.
Posted by margarettag at 1:28 AM