Artist rises from streets to shine on global scene

Photo/Qi Lin One of Mr Chilonga's paintings. No stranger to Nairobi’s art scene, Mr Chilonga has exhibited at Banana Hill once before, thanks to his meeting with the gallery’s manager, Shine Tani in Dar-es-Salaam.
By MARGARETTA WA GACHERU


Nambawala may not be a name well known to East African art lovers, but perhaps you have heard of Tinga Tinga and George Lilonga, the founder father of that distinctive style of painting most often associated with contemporary Tanzanian art. They are from Nambawala.

Or maybe you have heard of Makonde carvers, many of who have shifted their work sites to southern Africa.
But they too were originally from Nambawala village just north of the border between Tanzania and Mozambique.
And possibly you might have heard of Chilonga Haji, the East African semi-abstract expressionist whose colourful paintings are currently on display at Banana Hill Art Gallery throughout April. He also is a product of Nambawala village.
Chilonga claims he never fell under the influence of either Tinga Tinga or Makonde, but he admits he came from a village filled with artists and artisans.
“My father was a blacksmith, from a long line of blacksmiths, and my mother was a potter who also came from a long line of potters,” said Chilonga, who came to Nairobi especially for the opening of his second solo exhibition at Banana Hill. 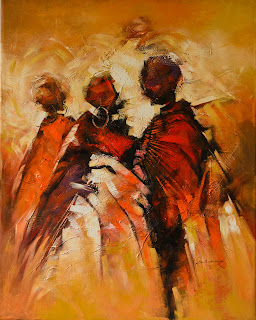 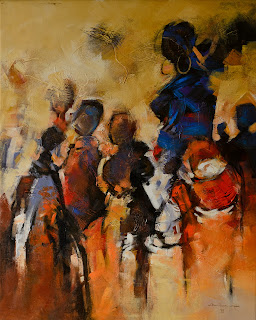 Photos by Qi Lin
Growing up surrounded by creative people who worked with their hands and earthy elements, it is hardly a surprise that one of Tanzania’s world class artists would early on discover his own artistic potential.
Only instead of following either parent’s line of self-expression, Chilonga took after his mother’s brother Belle whose special gift was drawing.
Ever since primary school he’d be called on to do the drawings of maps and charts and whatever graphic designs his teachers required.
But because his father couldn’t afford school fees for his first son, Chilonga had to fend for himself, and so he left Nambawala for Dar-es-Salaam after completing standard seven in 1984.
From the age of 15, Chilonga became a successful sign-writer, painting adverts for everything from tea rooms and bars to Hyundai cars.
But he grew dissatisfied just making adverts whose wall life was transient and short-termed.
“I decided I wanted to become a painter so that my art would endure even after I was long gone. I decided I’d try going international,” said the artist.
That was in 1992, and over the last two decades Chilonga has managed to fulfil his ambition.
Since he first began taking his art seriously and bringing his first paintings for show and sale at the Morogoro Store in Dar, and then to the now defunct Acacia Gallery, Chilonga has travelled and exhibited his art everywhere from Canada and the US to Germany, Austria and Switzerland.


He has also exhibited and sold well in many parts of Africa, including Rwanda, Uganda, Kenya, and South Africa where he has participated in several international artists’ workshops organised in affiliation with the Triangle Art Trust.
Share This Story
Share

Something of a chameleon
Twenty Years of Experience is the name of the artist’s current solo show at Banana Hill Gallery, but don’t expect a retrospective of Chilonga’s art.
On display are his most recent paintings, including a few he exhibited just before coming to Kenya in Kigale, Rwanda.
No stranger to Nairobi’s art scene, the artist has exhibited at Banana Hill once before thanks to his meeting Shine Tani in Dar; but he has also shown his work in group exhibitions at the now inactive RaMoMa Museum and also at the Village Market.
But he claims he has been something of a chameleon in recent times.
“I’ve changed my style of painting quite often since I found new local artists imitating my style so I’d try new ways of painting. Currently, I’m doing semi abstract work based on local village life,” Chilonga said.
His most recent work has an impressionistic feel and look to it, which is coupled with an artistic assurance that his brush strokes flow symmetrically and freely.
His blending of bold and brilliant acrylic colours also contributes to making Chilonga one of the most acclaimed contemporary artists in East Africa today.
His painting will be up at Banana Hill Art Gallery through April 30.
His prices range from Sh25,000 for a 20x25cm painting to Sh200,000 for the 160x130cm one.
« Previous Page 1
Posted by margarettag at 11:23 AM