This story was to appear in Sunday Nation's Young Nation but the images were not high-resolution enough for Nation editors. Pole Sana!

Confident, cheeky and comfortable being children of Kibera, Kenya’s largest slum and one of the biggest in Africa, they are the all-girl cast who starred last Saturday (april 29) in the Kibera Girls Soccer Academy production, entitled “Is there no End?”

Staged last Saturday at Alliance Francaise, the play was devised by a group of mainly teenage girls who call themselves Outspoken Associates.

They had a little help from Michael Onsando, a scriptwriter for the NTV sitcom ‘Mali’ and local thespian Oliver Wafula, two volunteers who have been meeting the girls every Sunday afternoon for last few months at the school to rehearse, revise and refine a script that examines aspects of teenage love in these times of profound social and cultural change in Kenya. 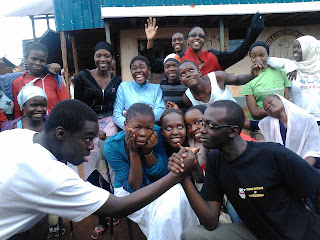 Tackling complex topics such as prostitution and betrayal, unwanted pregnancy and what to do with an unwanted child, the script was raw but reflective of real talent. It also addressed real issues witnessed by the girls in their everyday lives.

Outspoken Associates was started by five teenage girls who shared a passion for poetry and spoken word performance. Their group has grown to almost twenty after being ‘discovered’, encouraged and assisted by an American poet living in Kenya named Imani Woomera.

“She gave us courage to continue because she saw our talent and our passion for poetry,” said Lynne Sero, 18, one of Outspoken’s original cast members.

Since meeting Imani, the group has performed several places, including the Das restaurant in 2011 and Alliance Francaise in March, 2012, at the opening of the International Women’s Day celebrations.

“We also perform at school functions,” said Sero, who just graduated from the Soccer Academy but remains an active member of the group since she still loves writing poetry and performing it as well.

Explaining how the Kibera Girls Soccer Academy started in a similar ad hoc style as their Outspoken performing group did, Sero said the school grew out of the girls’ soccer team. It was instigated by their soccer coach, Abdul Kassim, who got tired of training talented young sportswomen in soccer who subsequently disappeared after winning multiple games. 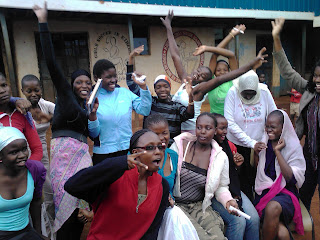 “He realized the girls needed a school to make them stick around,” said Sero. “So he borrowed money from his grandmother and bought a small plot in Kibera where he built a classroom for the girls. He’s been struggling to find sponsors ever since, but he has been fairly successful.”

The success of the girls’ soccer team, which Kassim trains, has been a major factor in winning both local and international sponsors for the Academy. Several of his students have made names for themselves at the national and continental levels. One has become a Harambee Starlettes; several others have joined the Kenya Women’s Soccer Team, and another just went professional and joined the Tunisian national team.

But it is the poetry and spoken word performances of Outspoken Associates that inspired Onsando, Wafula and most recently Anne Moraa to decide to volunteer regularly with the girls whose ages range from 14 to 22.

“I volunteer to assist the girls because I love poetry and the spoken word genre, and I also love the girls’ energy and enthusiasm,” Moraa said, a University of Nottingham graduate who at 22 is just a few years older than the oldest Outspoken cast members.

Judging from their performance last weekend at Alliance Francaise, I agree that Kibera doesn’t just have an outstanding girls’ soccer team. Their performing artists also have great promise both as writers and spoken word artists.

Posted by margarettag at 1:12 AM