Review of Kaafiri's May 2012 one man exhibition at Nairobi National Museum coming soon. In the meantime, i include a review i wrote of another exhibition Kaafiri had in 2009 which got published in July in the Daily Nation. The 2012 review will appear here after it gets published in Business Daily shortly.

Long before Mungiki gave dreadlocks a bad name, Kaafiri Kariuki wore them with pride and aplomb and as a trademark of his free-wheeling rasta spirit. 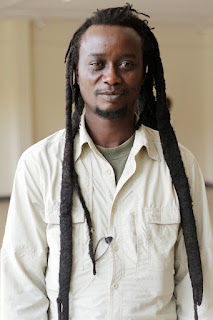 Kaafiri Kariuki in May 2012 during his most recent one-man exhibition at Nairobi Museum. Pix by Marta Obiegla

Having cultivating a taste for rastafari life from his chief mentor and rehab coach, a head librarian at Egerton University that Kaafiri refers to only as ‘The Beast’, the Kenyan musician-turned-visual artist has let his hair grow without a trim since 1993. That was the year his life got turned round and art became more than a passion; it became a lifestyle and a top priority.

“I got ‘art-ritis’,” he told The Daily Nation during the last days of his “Africa Resurrect” one-man show at the French Cultural Centre in mid-July; meanwhile his “Dancing Pen” exhibition has been extended at RaMoMa Gallery in Parklands until the end of this month.

Prior to Kaafiri’s discovery of his affinity for the visual arts, particularly painting, drawing and sculpture, he had fancied his heavy metal guitar music would not just make him a star: he planned on becoming a Kenyanized clone of Jimi Hendrix! In his wildest dreams, he even imagined himself a Kenyan cousin to Elvis Presley.

But careless living and bad blood between himself and fellow musicians led to his rapid flight from a degenerate Dandora music scene in 1991 and return to his mother’s upcountry home in Nyahururu.

Fortunately, that was when Kaafiri met the Beast, discovered that he, like his mentor, had a genuine talent for painting, drawing and even portraiture. And once he got through that first ‘cold turkey’ phase of his rehabilitation, Kaafiri began to meet people who saw him first as a dread-headed rasta-man and then as a gifted artist with all sorts of latent talents which were in the process of rapidly coming to light.

Among those who first saw Kaafiri’s untapped potential were Europeans, first a German and then a French man. The German introduced him to the mother of Bob Marley who asked him to paint a large portrait of her son (6 meters by 3 meters) which he did. Sometime later, the French man took him to France on a Lezart International Art workshop, Kaafiri being the only Kenyan artist involved.

Admitting that art has transformed his life, Kaafiri says his experience hasn’t been a breeze since he began painting. On the contrary, once the German, Dieter Batsch bought him paints and canvas, he also introduced Kaafiri to a local artists group with whom he shared all his paints. “I was left with nothing apart from my sketchbooks and a pen,” Kaafiri recalls.

But this was a blessing in disguise since he then had to resort to something he did really well, which is drawing. “That is when the ‘Dancing Pen’ was born,” he said. “Around 1997.” 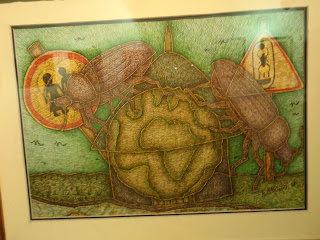 Kaafiri's African Resurrection drawing with his Dancing Pen became the front page of all my doctoral presentations on Globalizing Kenyan Culture. See the globe, Africa rising at the center, the scarabs from ancient Egypt symbolic of Africa's great past, and the children on their way to school symbolic of the future.

His one-man show at FCC as well as his contribution to a group exhibition at Ramoma celebrate more than a decade for Kaafiri with his dancing pen. “All I could do was draw in my sketch books, hoping that one day I would get paints to transfer my ideas to canvas with coloured paints.”

But before that happened, Kaafiri met a Japanese couple who insisted on buying his two sketchbooks which were filled with his intricate and multi-layered drawings. Their purchase was a life saver for Kaafiri who was practically penniless at the time.

But life has been looking up for Kaafiri ever since he came to appreciate his talent for drawing, and not just painting. Indeed, it is the delicately drawn details of his work, as well as the intricate puzzle parts of his art, that suggests a depth of insight into the contemporary African experience that few local artists express. For while Kaafiri now uses colour in most of his paintings, he still relies on imagery that has a story-telling impact.

He’s not afraid to portray poverty, prostitution and polygamy in his art. He’s also inclined to convey the contradictions of African life in his work—the huge gap between the rich and the poor, the urban elite and the impoverished peasantry. He even conveys a clear vision of how Africa is still bound to the West by inequitable neocolonial relations.

So while Kaafiri may be mistaken for a Kenyan artist who simply paints colourful pictures, what is more interesting to me about his work is the political undercurrents that emerge subtly in his art, currents that convey a depth and sensitivity on the artist’s part that one can appreciate.

Before the end of July, Kaafiri’s art will also be on display at Sipper’s Restaurant in Hurlingham. “I’d like to share my art with local people who may not make it to the galleries but who can appreciate visual art just the same.”

Posted by margarettag at 9:40 AM