The Power of Unity Exhibition which opened May 22nd and running through July 22nd at the Nairobi Gallery is unprecedented for so many reasons.
For one, it heralds the launch of the new ‘Kenya Visual Arts Network’ which is a construct of the Ministry of Justice, National Cohesion, and Constitutional Affairs (not the Ministry of Culture!) in collaboration with the National Museums of Kenya. 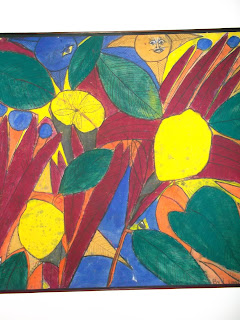 Funded by the European Union, which has never before supported cultural projects and cultural actors in Kenya, the Visual Arts Network could very well become a corner stone for local artists to finally be taken seriously by the Kenya Government, which until now has barely paid lip service to the value of culture in national development or even in the Vision 2030 position paper.
Indeed, as Wakanyote Njuguna observed at the Network launch, as recently as 2008, the Government policy paper for the Ministry of National Heritage and Culture did not make a single mention of Visual Art, leave alone visual artists. 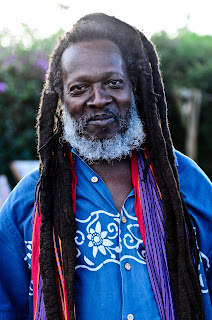 Wakanyote Njuguna spoke on behalf of the Kenyan Artists at the opening of the EU-funded Power of Unity exhibition at Nairobi Gallery. Pix by Qi Lin

Visual art wasn’t even in the vocabulary of the Culture Ministry. To underscore how valueless the Government has previously perceived the visual arts as being, in 2003 the new Coalition Government removed Art from the national syllabus.
“It was President Moi in 1985 who instituted Art as an examinable subject in the national curriculum,” recalled Dr. Elizabeth Orchardson-Mazrui, a senior lecturer in Fine Art at Kenyatta University.
Meanwhile, it was Michuki’s Rules that made matatu art and the beautification of public service vehicles (PSV) illegal. The former government minister’s Rules not only diminished the decorative beauty of matatus, which had already become a global attraction luring tourists to come to Kenya. They also rendered countless matatu and graffiti artists jobless when the rules were rigorously enforced.
So the big question (the elephant in the room?) now is whether the Kenya Government will seriously support its visual artists and appreciate the role the EU understands they have the potential to play in promoting ‘good governance’, conflict resolution and national unity.
According to the Deputy Head of the EU Delegation to Kenya, Marjaana Sall, the role of culture in development cannot be overstated. “The EU believes that Culture lies at the heart of human development and civilization…Culture is a core value both of Africa and Europe. It is a common denominator of both continents,” she said at the Network launch. 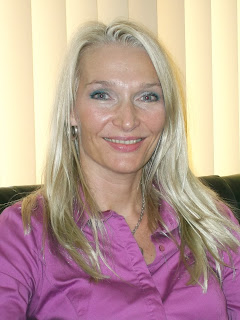 Having as its primary concern the promotion of good governance and development, the EU in collaboration with the Justice Ministry established what it calls the Non-State Actors Support Program or NSA-NET, to promote democratic governance through ‘capacity building’ and working with civil society and cultural actors.
It’s out of that commitment to building capacity among the cultural actors that the Kenya Visual Artists Network was born and the Power of Unity exhibition also came into being. Having sent a shout out to visual artists connected to the National Museums of Kenya, adjudicators Wakanyote Njuguna, John Diang’a and Harsita Waters of Alliance Francaise selected just over 50 artworks out of more than twice that many entries to be part of the exhibition.
As an added incentive to visual artists, six cash awards were also offered, ranging from KSh40,000 down to KSH5,000. Announcing the top prize, Wakanyote said John Mwangi Maina was most deserving since one stipulation for winning was including elements related to good governance and development in one’s artwork. 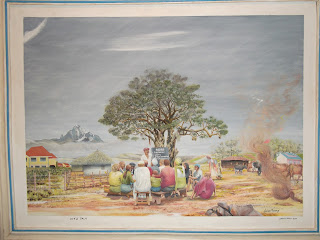 Maina’s “Let’s Talk’ clearly reflected some of the key concerns the EU had identified. At the center of a rural landscape painting, he had drawn a gathering of peoples from a diversity of backgrounds listening under a tree to someone talk on the virtues of resolving problems amicably, democratically, and peacefully.
The other five artists to win cash awards were Androuelle Simiyu Susan, Charles Ngatia, Sebastian Kiarie, John Solly Savala and Peter Kimani Ndiritu. 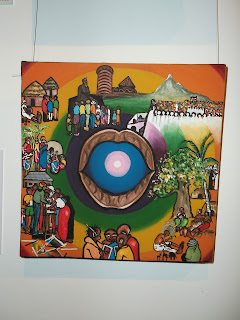 Not all of the artworks in the show conveyed the same attention to the themes the EU sought to support. For instance, Allan Joseph Green’s nudes seem totally out of place in the exhibition. So do some of the wildlife paintings and the abstract expressionist works, none of which offer much food for thought.
But then the Kenya Visual Artists Network is brand new. One assumes the organizers will be conducting workshops, seminars and art residencies with the EU funding to ensure that visual artists get the message: that art has the capacity as Madame Sall said in an exclusive interview with Business Daily, to promote national unity, foster a sense of national identity and even strengthen economic development by cultivating employment of artists in Kenya’s creative economy. 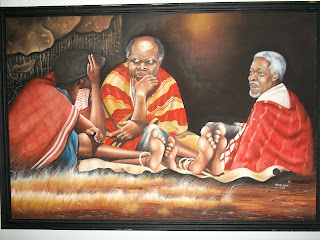 Hassan Athman's Power Sharing didn't win a cash prize but was one of the most striking paintings in the exhibition.
Posted by margarettag at 6:49 AM