By Margaretta wa Gacheru
May 2012

Samuel Githui has attended art residencies in Italy and seen what international artists ask for and often obtain on the European art market. His art is even in permanent museum collections overseas. 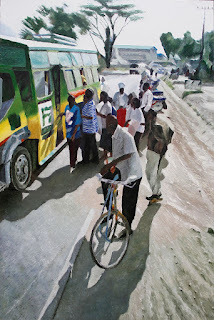 Yet by bringing a comparable pricing scale back with him to Kenya, Githui’s art may be beautiful, even thought-provoking, but the price-tag may be more than a Nairobi art market will bear.

Currently, at OneOff Gallery (in Roslyn), several of his paintings are selling for nearly KSh900,000: Mitungi, Nyororo, and Kusimama na Kumi which ironically are all reflective of the more humble side of Nairobi life, a world Githui knows well. 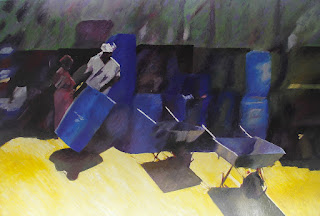 Samuel Githui's Mitungi at OneOff Gallery through end of May 2012. Pix by Marta Obiegla
For Githui is a guy who had to drop out of Creative Arts Centre in the early 1990s for want of school fees. He went to work as a sign writer, painting billboards and logos for Softa soda, BAT and even Trust condoms.

He tried his luck with Gallery Watatu when Ruth Schaffner was still around. Yet the only way she would look twice at his artwork was when he shifted his style to something that appeared more untutored and naïve. By so doing, his work got into the initial East African Industries for East African Art exhibition in 1995.

It also led to an invitation from Rob Burnet to join Kuona Trust at the outset. Unfortunately, the promise made to provide art materials to struggling local artists was kept for only two weeks, according to Githui.

“After that, we were told to bring our own art supplies, which I couldn’t afford.” Plus bus fare from Donholm where he still lives to the Museum and back on a daily basis was also prohibitive. 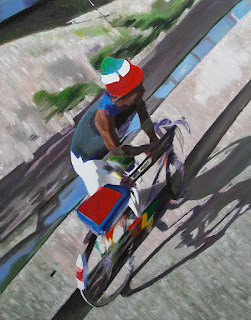 Githui’s big break came in 1998 when a fellow artist, Dishon Obok, introduced him to Family Planning Private Sector, the NGO founded by Dr. Erick Krystal which since the 1980s had been enlisting local artists annually to help create socially meaningful calendars.

The year he started painting for FPPS, the social message artists were asked to illustrate was on corruption. Githui’s painting, called Land Grabbing won him KSh20,000, which at the time was big money to him. It gave him incentive to paint for FPPS for several more years. One of Githui's best examples of the contrast in Nairobi between rich and poor, skyscrapers vs matatus. Pix: Marta Obiegla

Meanwhile, Transparency International also took note of his powerful political art which revealed the consequences of corruption, especially its impact on children and the growing social inequality.

In his current OneOff show, called Zebra Crossing, Githui returns to the theme of social inequality. Yet he does so with subtlety and understatement. 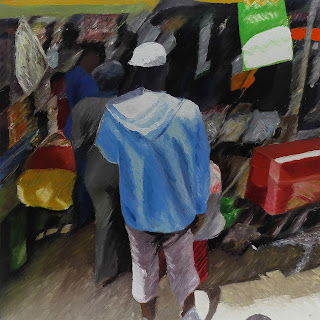 For instance, one might want one of his works out of appreciation for his cross-hatch technique of painting with contrasting hues of light and dark. You need not know the contrast is symbolic of Zebra Crossing intersection, which is just about the only place in Kenya, he notes, where the rich and the poor meet!

Think about it: the man on foot, on a bike, a boda boda, loading a wheel barrow, or waiting to board a bus. All are pictured in Githui’s paintings, yet none of them regularly encounter a rich man except on the road, where supposedly the pedestrian has the right of way. 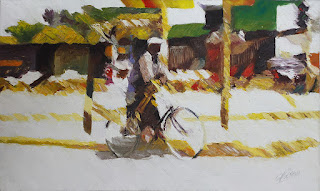 Kwa Mataa: Waiting for the Traffic Light to Change. Pix by Marta Obiegla

Ironically, the rich man is barely visible in Githui’s art. Instead, it’s filled with humble folk: many men on bicycles, one with hessian sacks (Gunia) at the back, another riding in the pouring rain (Mvua Kali), another stuck with a broken chain (Nyororo).

He’s painted casual laborers (Vibarua) wondering where to go next, a family on foot loaded with all their belongings (Bwana na Bibi) and a young lad waiting in line to buy 20 bob of airtime (Bamba), symbolic, Githui says Bamba is symbolic since youth generally have much to say about solving Kenya’s social problems, but no one’s listening. 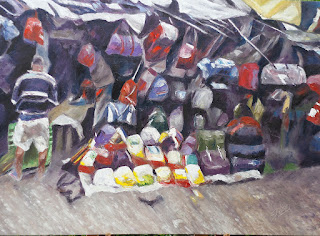 One of my favorite paintings by Githui is Mifuko, bags, just because my dear mama was a Bag Lady. Pix: Marta Obiegla

Zebra Crossing is filled with images of busy Nairobi life, like Ya Leo which is a portrait of a mitumbia (second hand clothes) seller scrubbing his wares so they look like ‘new’ once he takes them to the street for sale.

The only evidence of the Big Man in the show is Kanjo, which is Sheng for the scary City Council guys who drive around in large Land Rovers and demand bribes from the locals.

Currently preparing for the next East African Biennale in Bujumbura, he just took part in this year’s EAB in Kigale, the only Kenyan attending. Locally, he’s exhibited at Nairobi National Museum, at Gallery Watatu, the late RaMoMa Museum and Le Rustique restaurant.

Having exhibited both locally and abroad, Githui has come a long way since he dropped out of CAC. But he still lives in Donholm and stays in close range of glaring inequalities of Kenyan everyday life. His portraits are powerful reflecting people’s struggles to cope with the harsh realities of their lives. 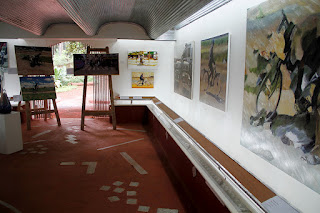 Posted by margarettag at 9:33 AM